We offer pet surgery services that range from basic procedures like spay & neutering to more complex procedures. Learn more below. 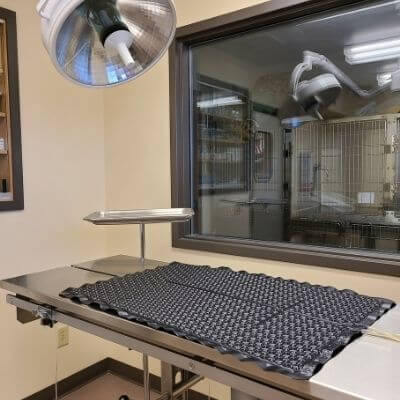 Forest Hills Veterinary Clinic offers a variety of surgical services for dogs and cats, ranging from standard spays and neuters to mass removal surgery. Because safety is always our main priority, we do a thorough inspection and pre-anesthesia testing before each surgery. We will keep a close eye on your pet during the procedure to ensure their safety. After that, you’ll be given detailed aftercare instructions, and we’ll gladly address any questions or concerns you may have.

The ovaries, fallopian tubes, and uterus are removed from a female dog or cat during an ovariohysterectomy, sometimes known as a “spay.” This prevents her from reproducing and puts an end to her heat cycle and breeding instinct.

The testes of a male dog or cat are removed during orchiectomy, sometimes known as “neutering.” He is unable to reproduce as a result, and male breeding activities are reduced or eliminated.

Thousands of unwanted dogs and cats, including puppies and kittens, are euthanized every year. The good news is that pet owners who are responsible can help. You can help prevent the birth of unwanted puppies and kittens by having your dog or cat sterilized. Spaying and neutering can help avoid unwanted litters, guard against major health issues, and alleviate many of the behavioral problems that come with the mating impulse.

The ovaries of a female dog or cat are removed, which removes heat cycles and minimizes undesired behaviors that might cause owner irritation. The breeding instinct in male dogs and cats is reduced when the testes are removed, making them less likely to roam and more satisfied to stay at home.

Female dogs and cats who are spayed young can avoid significant health issues later in life, such as uterine infections and breast cancer. Your male pet’s risk of acquiring benign prostatic hyperplasia (enlarged prostate gland) and testicular cancer can both be reduced by neutering him.

The surgery has no influence on a pet’s intelligence, play, work, or hunting abilities. After removing their ovaries or testes, some pets behave better, making them more desirable companions.